What happens inside an art museum while one exhibition is being taken down and the next is being set up? What artistic potential does this “in-between” hold?

It is precisely on this question that Freya Hattenberger and Peter Simon are developing the site-specific installation and performance “ex/ peri/ mental”, which as a one-day event allows an exclusive look behind the scenes of the exhibition construction and illuminates the perception of the museum as a “rough cube” instead of a white cube.

Hattenberger and Simon directly and intensively weave the acoustic and spatial peculiarities of the construction site into their artistic intervention, which can be walked through in a circular course. Performative interventions by the two artists at interconnected stations change the parameters of the audio-visual installation and allow a repeated “round walk” through the raw spaces with constantly recomposing elements of contemporary live art, kinetic media set-ups, and electronic music. 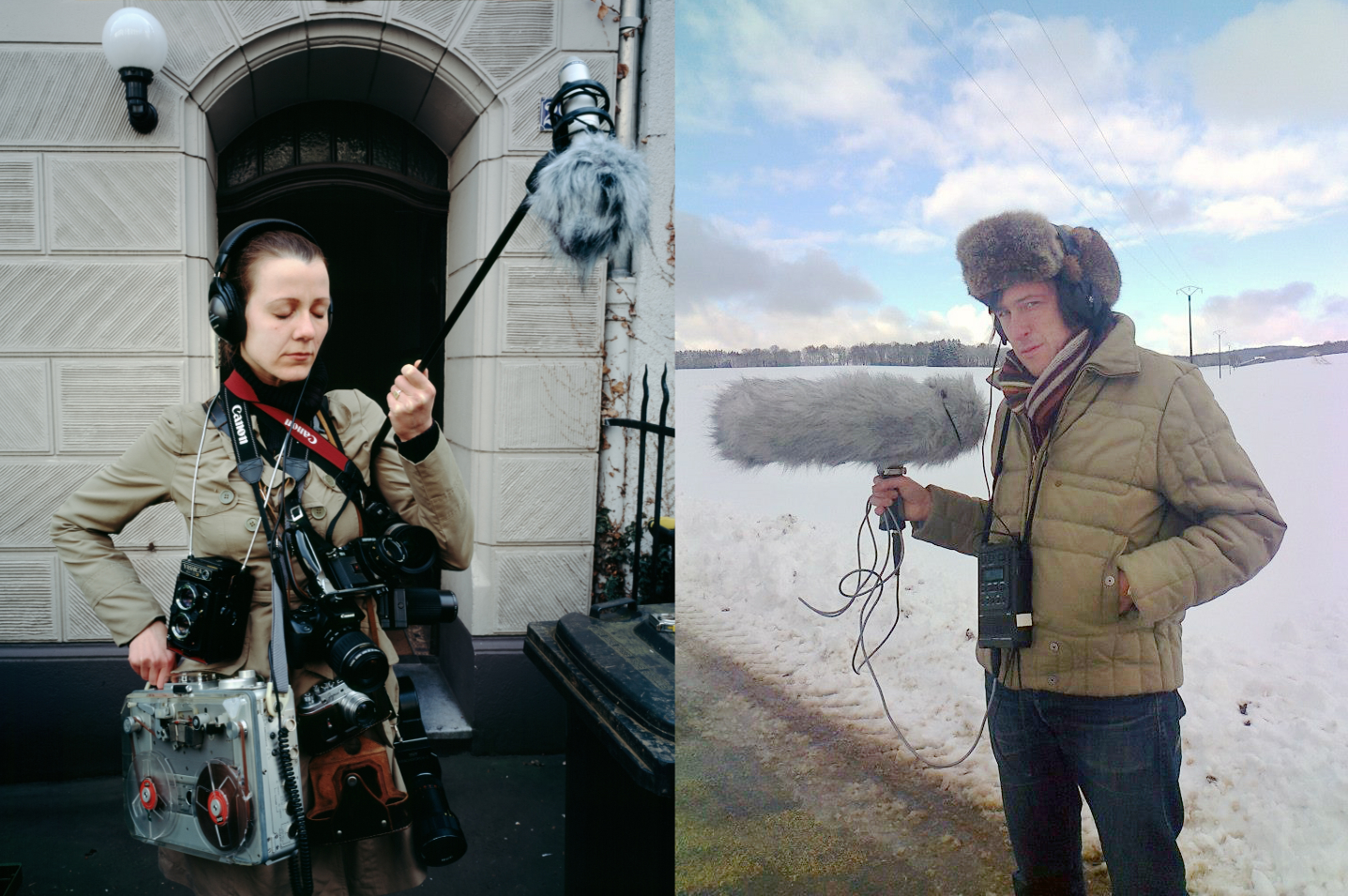 Revisited: Generators and Generations. Experiments – Music – Electronics in NRW #audio is now the third edition of this research, in which listeners can this time immerse themselves in the sonic side of the media arts. Starting with the founding of the WDR’s electronic music studio in Cologne, authors Freya Hattenberger and Peter Simon trace paths that musicians and artists in the field of experimental music have followed in the region, and let many of the players from then and now have their say. When the Cologne recording studio was founded in 1951, it was the first of its kind in the world and was thus able to attract renowned musicians such as Györgi Ligeti, Henry Pousseuer, Gottfried Michael Koenig and others to the Rhineland, who artistically explored the technical possibilities on site and created important avant-garde compositions. A lot has changed since then. Instead of an almost baroque-looking studio with closet-sized technology, today a laptop and handy instruments are often all that is needed to produce flexibly at home and publish online. 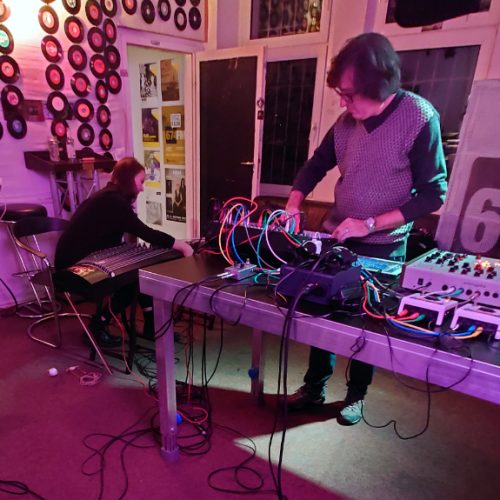 Talk and sounds from Les Éclairs and other projects.

Freya Hattenberger and Peter Simon have been cooperating in joint sound art and performance projects since 2008.
They have long been concerned with the interaction between the audible and the visible – as well as the invisible side of architecture.
On the one hand, the project “MEANDER TAPES – Tender Sounds For Brutalist Architecture” takes up the character of sounds floating around in space. He also refers to the meander as an ornament, which first appears as a structural architectural element in the form of friezes. She is interested in the contradiction between the rigid, massive, hard materiality of concrete and the fluid sound that fills every form. Sound is the medium that adapts to the shape and structure of the space, describing it, bringing it to life and defining a new dimension. The building is their instrument. When they are in this resonance space, they become sound generators – and thus part of the instrument.

Another work they will present is “IHNAHE EXHALE.” Here, bioacoustic methods make the actions of microbes audible, with which they enter into an artistic dialogue. The sonic result in turn influences the sonified processes themselves, evoking deeply felt respect for all that is alive. The work “Terra Incognita” can also be heard in this context. Here, sounds produced directly in a natural environment meet the inhabitants of the habitat. Various moments of irritation arise in this dialogue.

In the project STRING THEORY they explore the interspatial and interpersonal.
The thematic focus of their live set is the interaction and mutual influence of scientific knowledge and acoustic perception.

Recorded Live in the empty Skulpturenmuseum Glaskasten Marl in 2022
Mastering by Clos et Omono 2022 on REVOX A77, SM 468 from Recording The Masters

This experimental arrangement consists of the sound that is brought into the room. It is electronically modeled sounds that are produced in the room. There is an initial idea of which instruments will be used. How and why is decided on the spot in the improvisation with them. Like a sculpture of sound that is positioned in the space. The rooms in the museum are empty. No works of art are exhibited. The electronic sound that is sent into the room takes over the role of the work of art, the sculpture. It becomes a sculpture of sound. But it is also a changeable, kinetic sculpture that temporarily moves through the rooms.
Everything is improvised. It emerges directly in the moment, it grows, moves through the space and disappears again, fizzles out, until a new sound comes and spreads.

Brutalism as an architectural style is a worldwide phenomenon. It is the architecture in which we grew up. A love-hate relationship connects us with these buildings, whose fascination is fed by the monolithic.
School buildings, museums, city halls, libraries… at the moment we are experiencing a paradigm shift and see these buildings threatened with demolition. More and more of these complexes are disappearing from the cityscape. Structural substance is crumbling, the preservation of historical monuments is dealing with them. Brutalism once again becomes a generational issue.

Brutalism is a system outside political ideologies. Whether in Texas, Brussels or Bratislava; Brutalist buildings were built both in the communist Eastern Bloc and in the capitalist West.

In this second experimental setup I worked with the room. Here I took the sounds that were already present in the room (from the outside as well as from the inside) and amplified them and played them back into the room. This resulted in feedbacks that I continued to work with. I played with the individual, specific frequencies, the standing waves that resulted from the material, and thus made the whole room vibrate.
Depending on the location and material, different frequency ranges stood out and were more present than others. 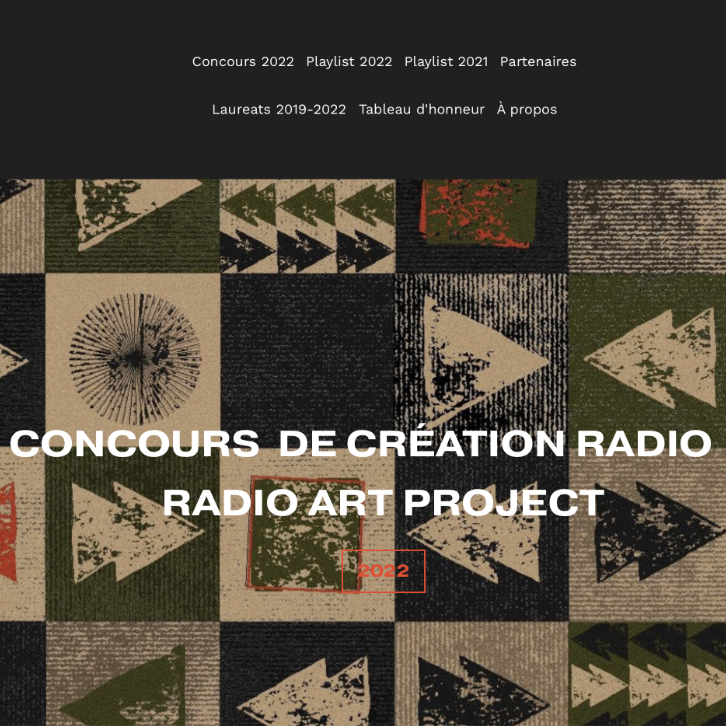 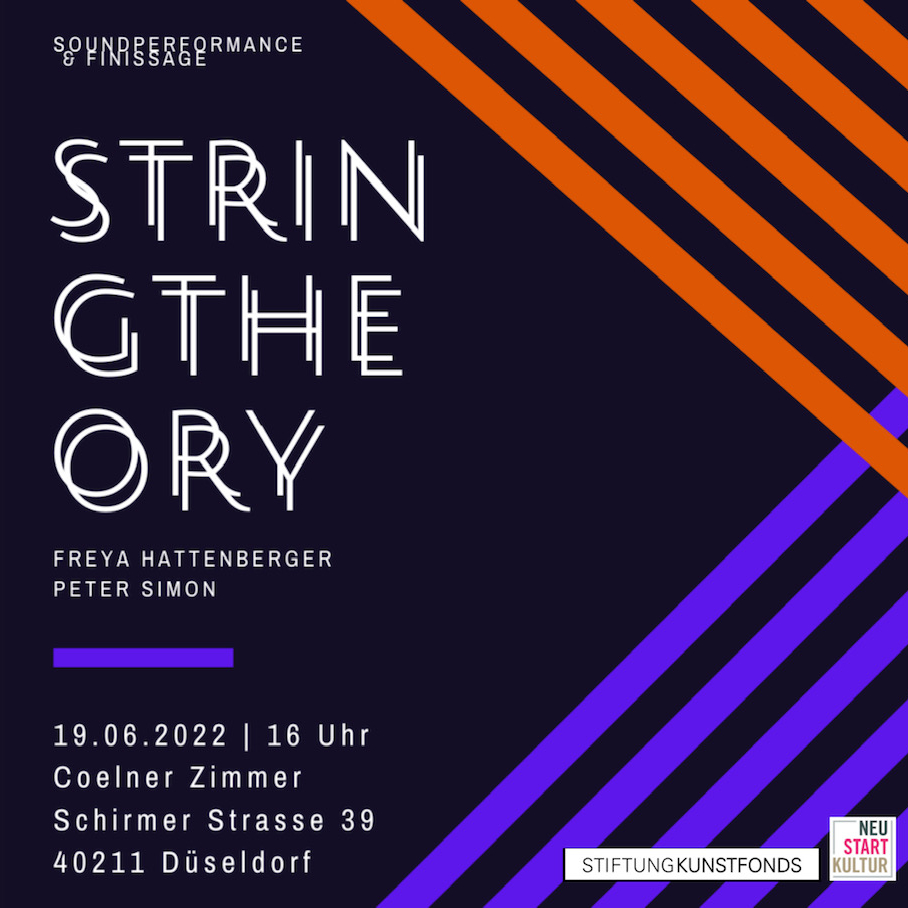 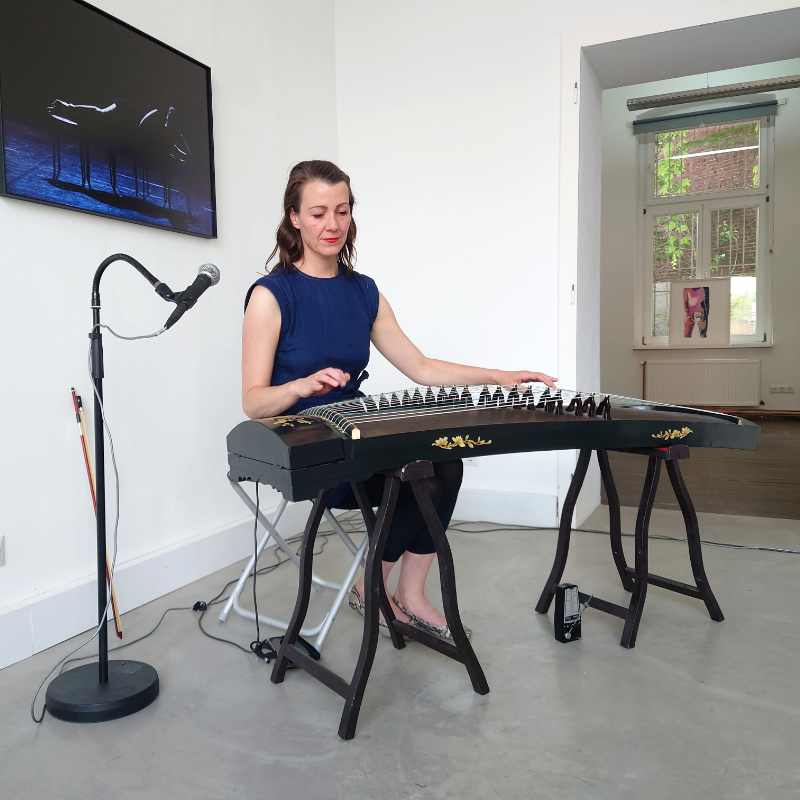 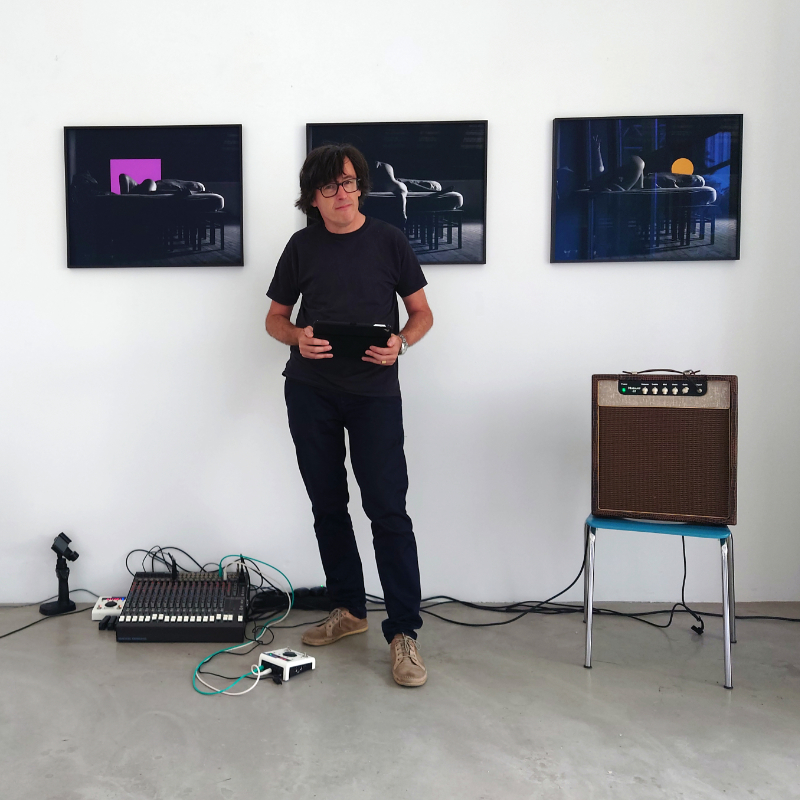 Sound performance at the end of the exhibition of Freya Hattenberger “Tomorrow I’ll return and continue”, photography and installation.

At the INDERNET hybrid Festival ! 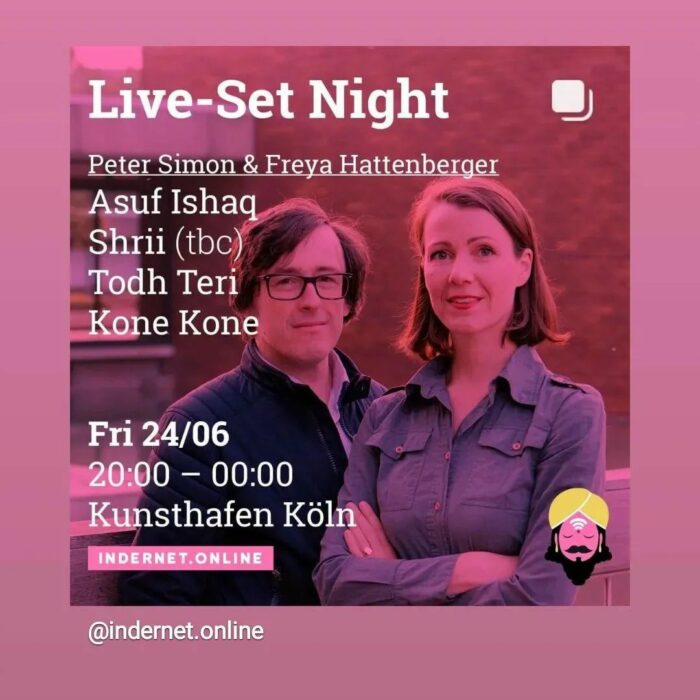 To conclude the Brutalism trilogy at Studio Acoustic Art we listen to India
The project “Béton Brut Bangalore – Sound as Ornament” deals with sound art, performance and architecture in an interdisciplinary way. 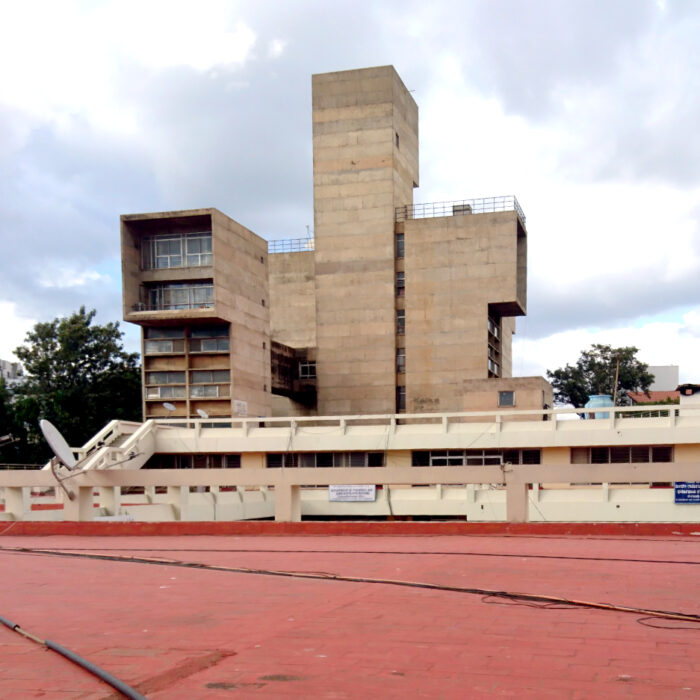 Audio feature by Peter Simon and Freya Hattenberger about the first edition of the Videonale festival in 1984.

In the web series Revisited, actors in media art and digital culture from NRW embark on an artistic research journey. Each episode focuses on an event or development from the history of media arts in the region.

Conceived and produced for Medienwerk.NRW 2022 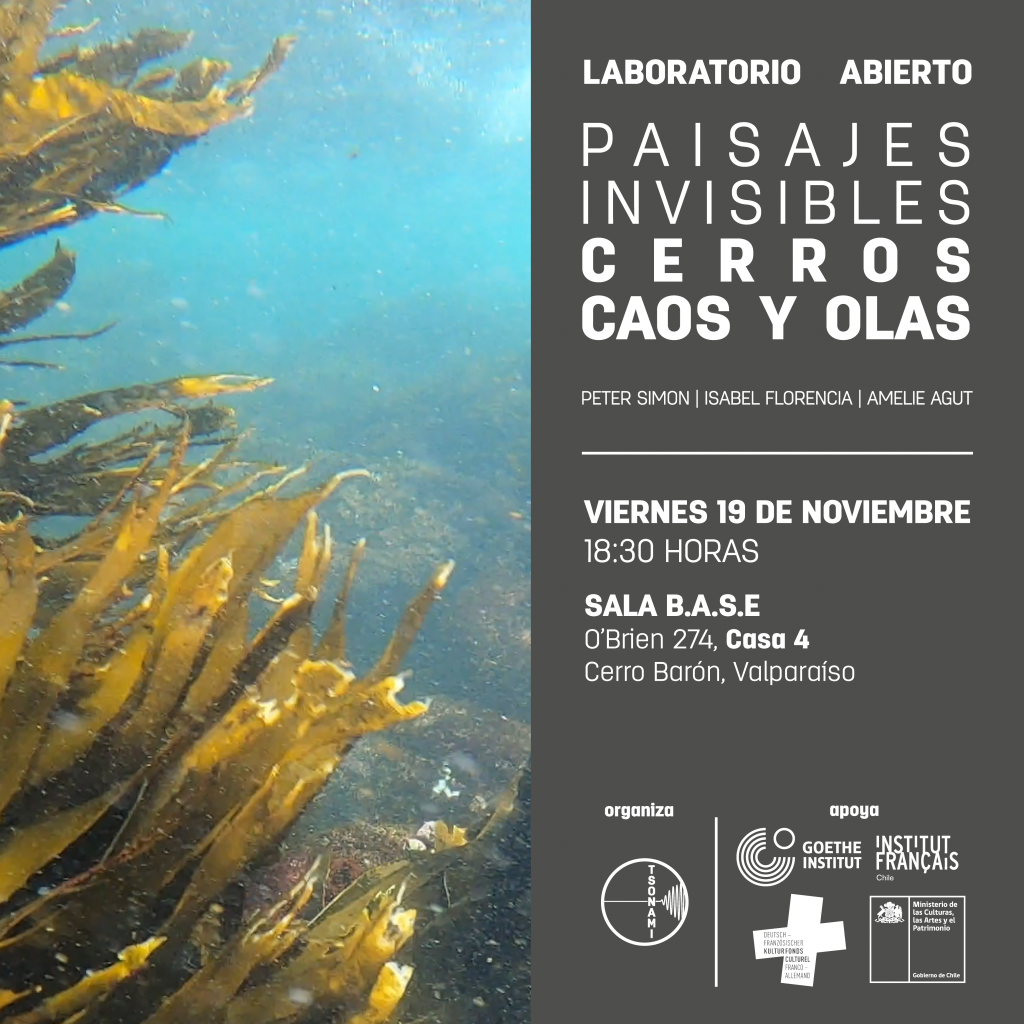 An open lab by the artists: Peter Simon (Germany), Isabel Florencia (Chile) and Amelie Gut (France). As part of the Resonancias program organized by the Goethe-Institut Chile and the French Institute of Chile with the support of the Franco-German Cultural Fund and the Chilean Ministry of Culture, Arts and Heritage, with B.A.S.E Tsonami as a partner. 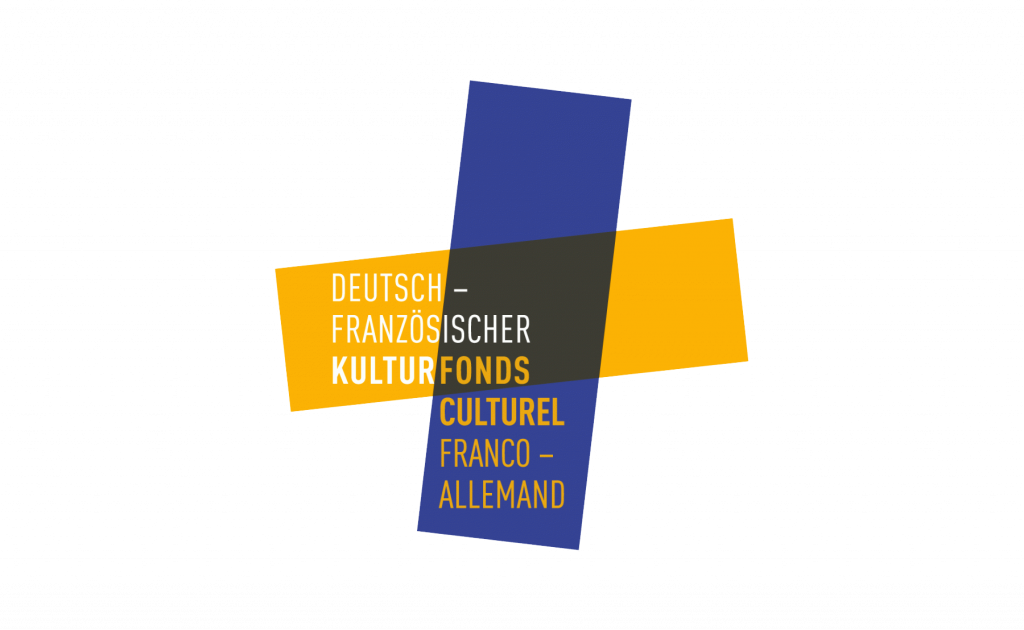 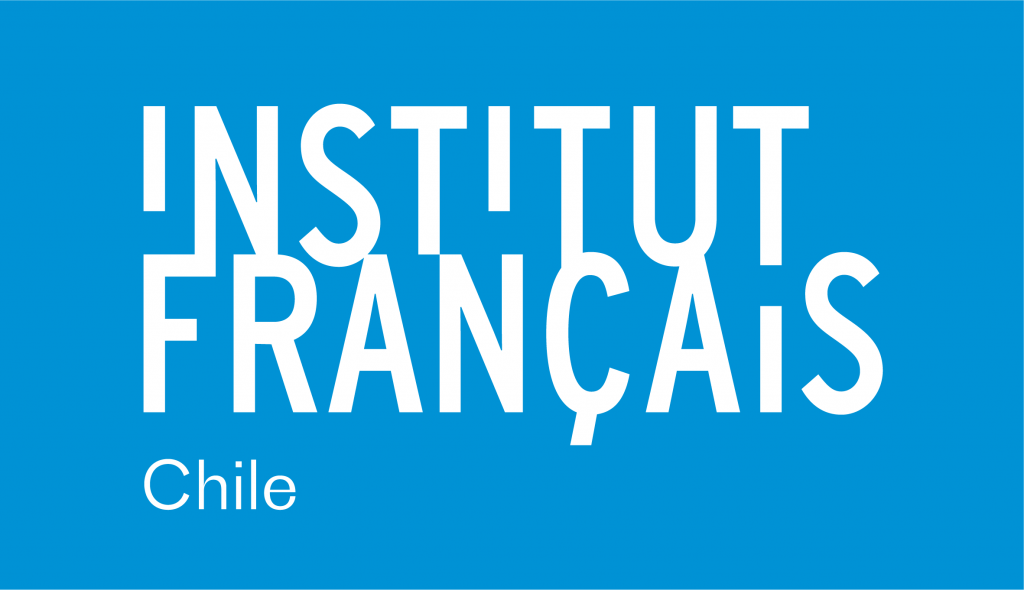 Those who missed the live performances at the BLAUES RAUSCHEN festival this fall will now have the opportunity to experience at least the acoustic part.

Freya Hattenberger / Peter Simon and Caroline Profanter were guests at the atelier automatique in Bochum on September 29th.

The duo Freya Hattenberger/Peter Simon draws attention to relationships with non-human creatures in a bioacoustic experiment. Caroline Profanter weaves the audience into a web of microtonal feedback until it is no longer possible to distinguish between origin and echo.

All living things need communication. Even if it has no speech organ, it has a voice. Biological processes give rise to sound events and provide signs of life. In a laboratory-like setup, the duo Simon/Hattenberger uses bioacoustic methods to investigate the sound production of microbes and enter into an artistic-experimental dialogue with them. Their “voices” are the instruments that the two stimulate and orchestrate. What becomes audible is a manifestation of life itself.

All living things need communication. Even if it has no speech organ, it has a voice. Biological processes give rise to sound events and provide signs of life.

In our laboratory-like setup, Simon/Hattenberger use bioacoustic methods to investigate the sound production of microbes and enter into an artistic-experimental dialogue with them. Their “voices” are the instruments that stimulate and orchestrate the two. Audible becomes a manifestation of life itself. 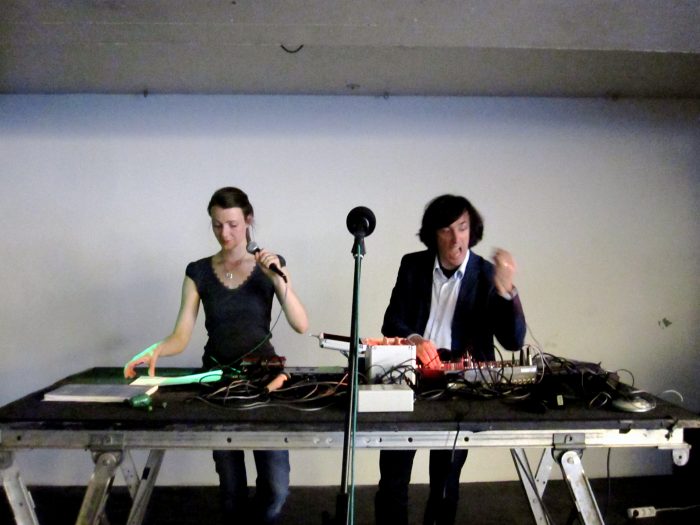 The first episode focuses on the exhibition Reservate der Sehnsucht (Reserves of Desire) by HMKV Hartware MedienKunstVerein, which took place in 1998 in the cellar tower of the former Union-Brauerei in Dortmund. The exhibition, which was pioneering for the city, the region and the media art scene, continues to have an impact to this day. Not only did the show, in which 30 regional and international artistic positions played on the impressive half-ruin, anchor the media arts even more firmly in the Ruhr region, but also in the area of the Restructuring and conversion of the old industrial buildings in the region, the exhibition is considered groundbreaking and was an important impetus for the fact that the building is today’s Dortmunder U – Center for Art and Creativity was established. 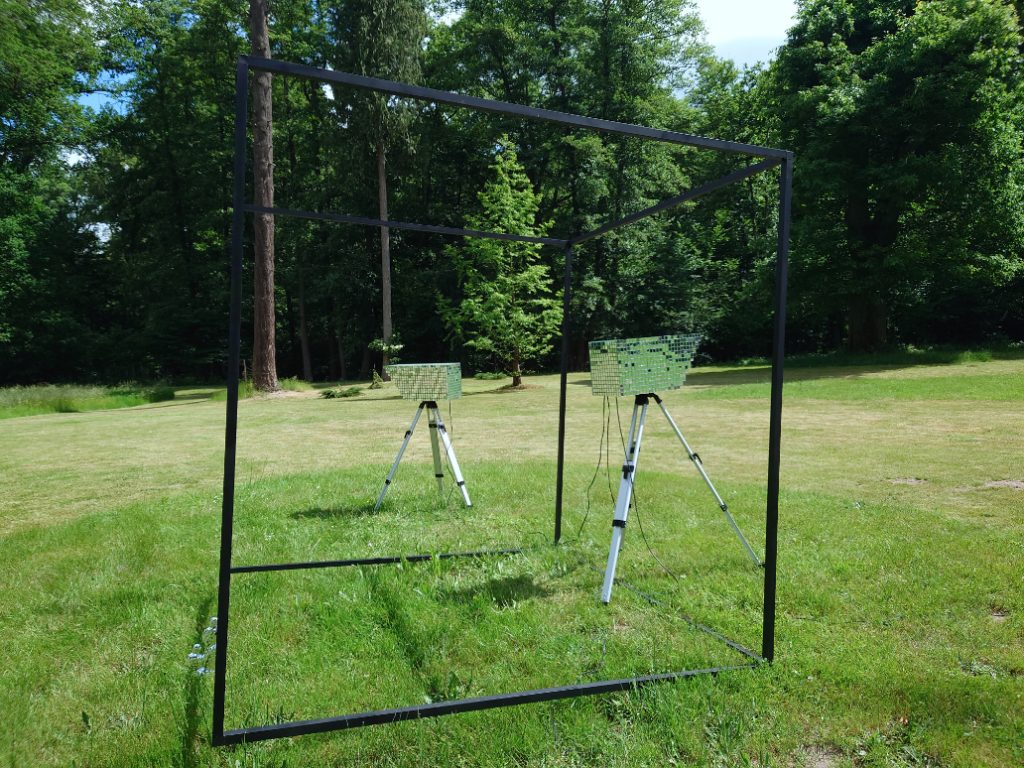 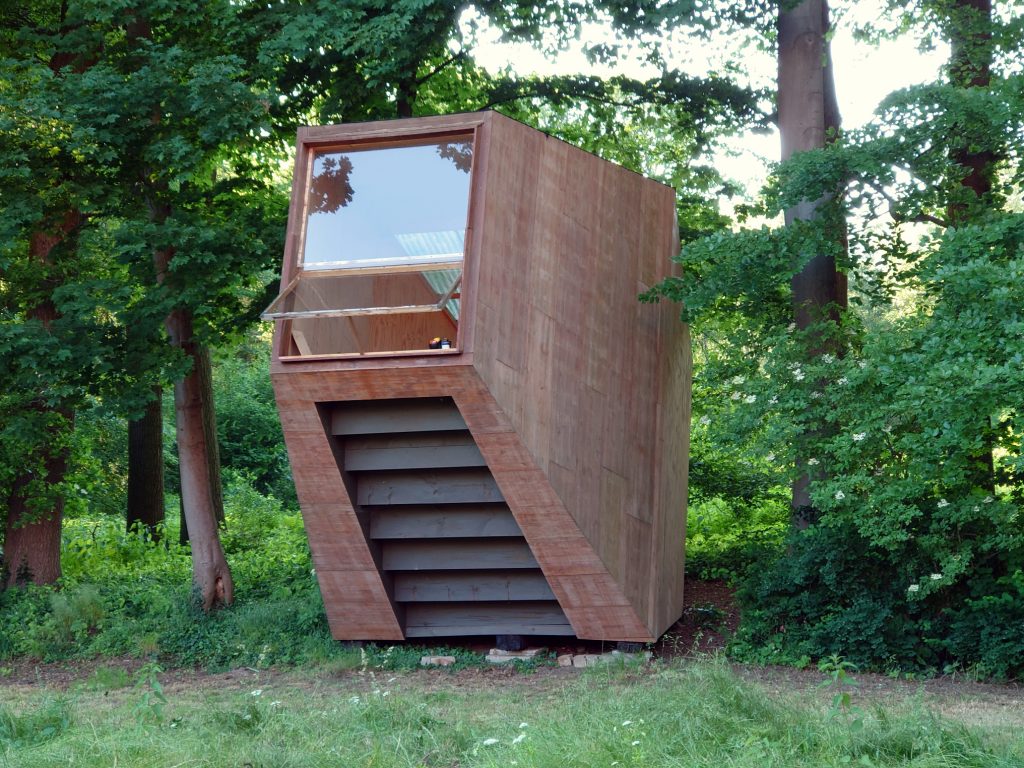 Within the framework of the INTRAREGIONALE 2021

The two-part work at Kulturgut Poggenhagen highlights the topic of bioacoustics.

Two installations / sound sculptures in two different locations on the large site correspond with each other. Both installations illuminate the relationship between man and nature and try to explain the balance of a biotope/collective in a sensitive way. How does nature communicate with man? What misunderstandings/ translation errors can occur?

Are we able with our sensory organs to fully perceive and understand the variety of sounds in nature?

Sounddesign for the Film LYDIA by Christian Becker,
at the 67th International Short Film Festival Oberhausen May 1-10, 2021 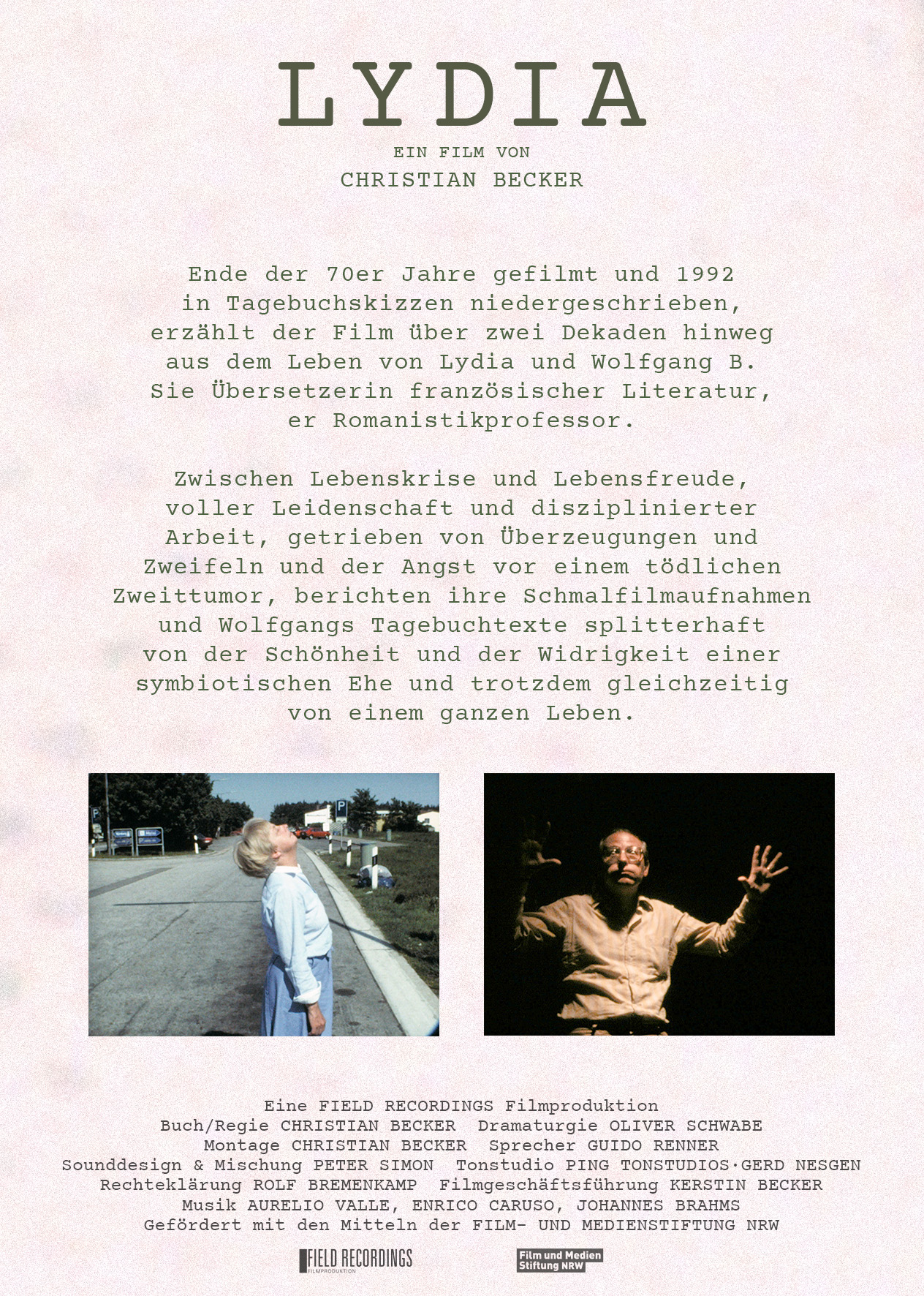 The composition ‘BANGALORE BANG!’ was created from audio material collected on site during the residency at the Goethe Institute / Max Mueller Bhavan in Bangalore, India.

We were particularly interested in recording the acoustic ‘fingerprint’ of the country’s rapidly growing megacity and IT metropolis. In this audio piece, we consider the interplay of urbanism and city planning and engage with the city’s residents and their lives. Materiality, speed, urban structure and the fluid reality of Indian culture form an ornament of sound in this composition.

in THE WIRE TAPPER 55 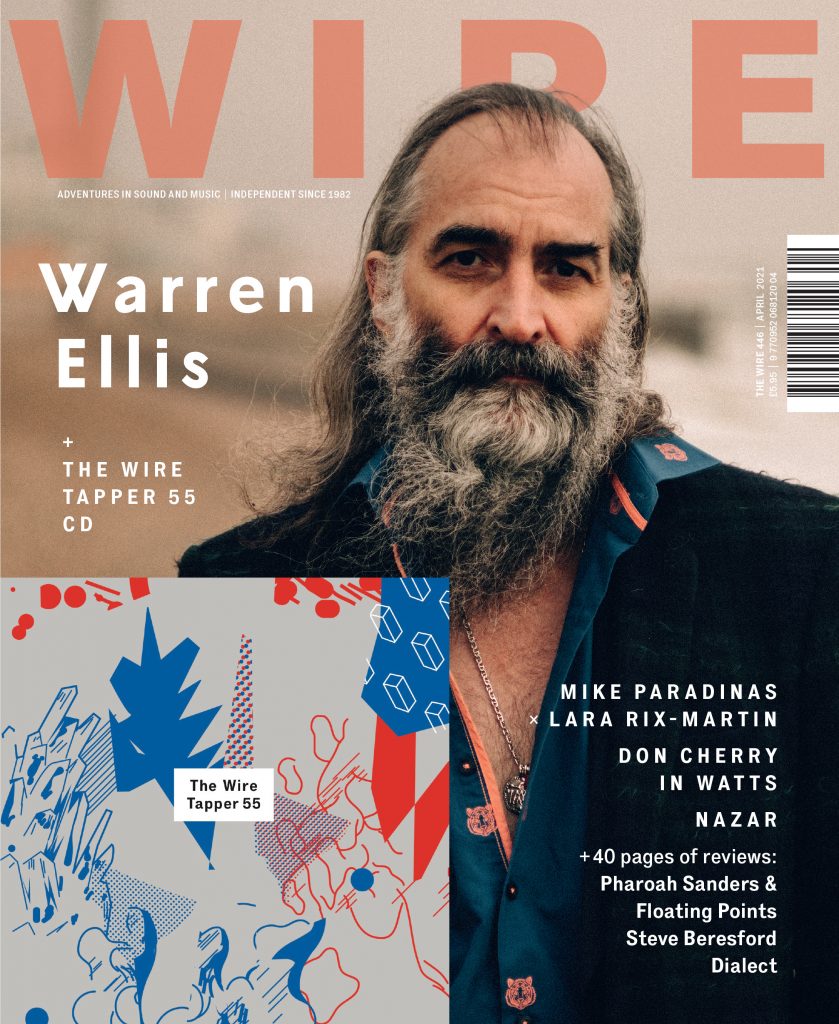 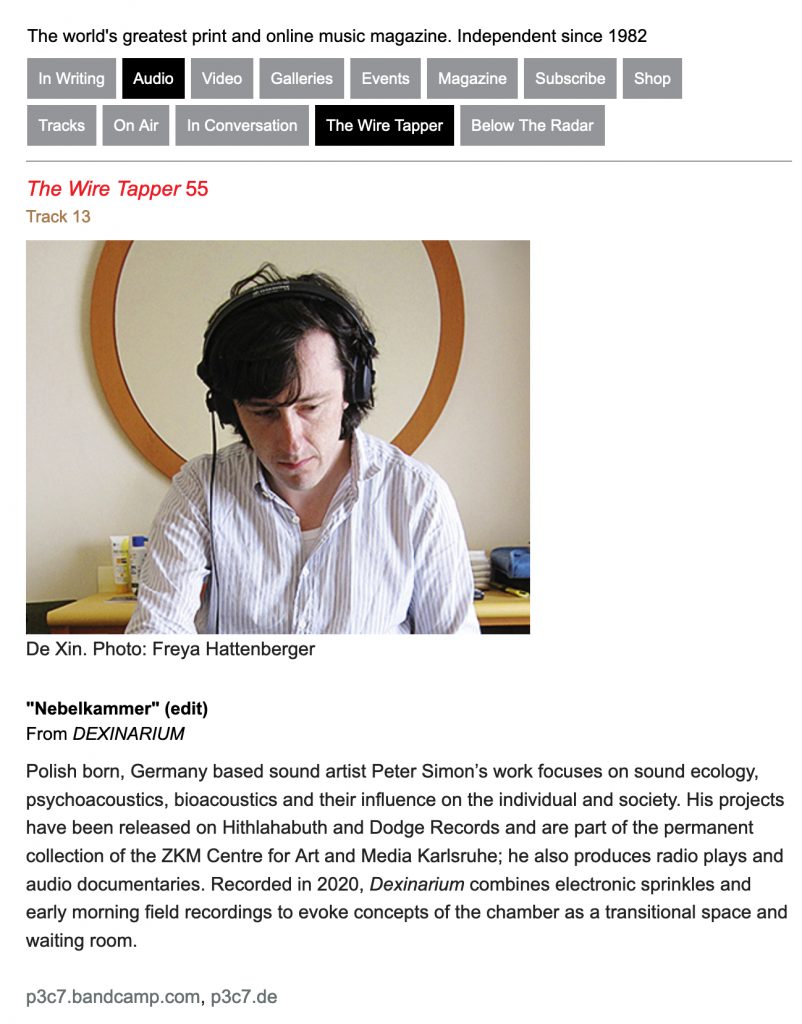 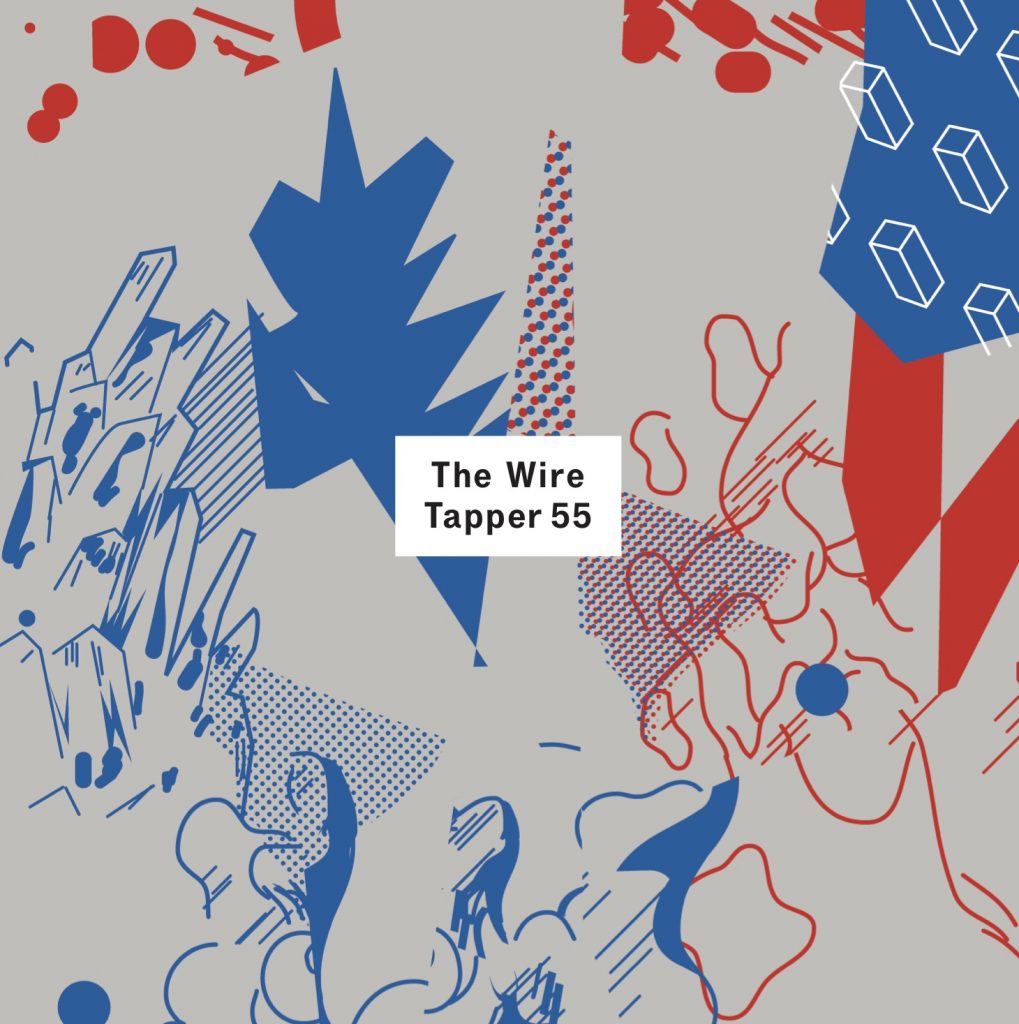 All copies of the April 2021 issue of The Wire will come complete with an exclusive free CD attached to the cover, The Wire Tapper 55, the latest volume in the acclaimed series of new music compilations.

As with previous volumes this CD, which has been compiled by Shane Woolman, Astrud Steehouder and James Gormley, is packaged in a heavy duty card sleeve designed by The Wire’s art director Ben Weaver and featuring artwork by Infinite Livez. It contains a range of new, rare or exclusive tracks from across the spectrum of the kind of underground/outsider musics covered in The Wire.